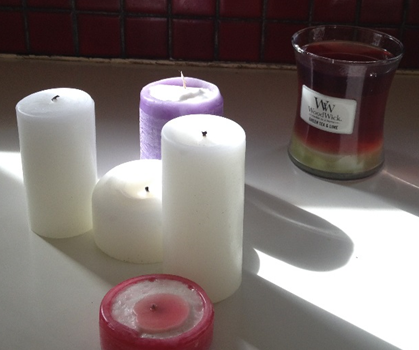 Part of my duties as the person in charge of the chapel is to melt down candles until the candle wick is visible. This is to prevent the candles ‘smoking’ once they are in use, because we have at least an hour or two of daily morning prayer and the candles burn for that long. As I was burning the candles down in a pan, the candle wax was melting to a form of thick oil. The candles were going through a process of being in intense heat and they were melting and losing height. Given that it was a day of prayer as I did this, my mind was instantly lifted to reflecting upon something that I have learned in one of my classes – that there are different connotations for the word ‘mercy’ in Hebrew, Greek and Latin.

One of the meanings of the Greek word for mercy is “oil poured out”. I was instantly reminded of the meaning for Gethsemane. When I was in Jerusalem, while visiting the garden of Gethsemane, I learnt from the tour guide that the meaning of Gethsemane is “olive press.” I was thinking about Jesus who was pressed in agony in Gethsemane, so that God’s mercy could be poured out upon humanity. By Jesus’ willingness and his ‘yes’ to the Father in that very place to go to the cross, mercy was poured out upon us.  Interestingly, ‘mercy’ in Latin has a meaning that says, “miserable heart,” meaning having pain in your heart for the pains of another; and taking pains to do something about their pain. I realized that Jesus did take the pain of sin and suffering in Gethsemane.

Recently in my prayer the Lord was showing me many circumstances where I can be merciful. Practically and logically I found that difficult and there was rebellion in me. However, I was pondering the Lord’s invitation and realized that it is my vocation to be mercy and love for the world. In places of being in an ‘olive press,’ that is in places of challenge and suffering, I can give a response of mercy and love, because Jesus has done it first.